WASHINGTON, D.C. – Today, Senators Rand Paul, R-Ky., and Cory Booker, D-N.J., introduced a modified form of their popular FDA Modernization Act in the hopes of passing the bipartisan, non-controversial bill in the Senate this week. The new bill is identical in wording to the version of the FDA Modernization Act approved in June by the Senate Health, Education, Labor and Pensions Committee.

Animal Wellness Action, the Center for a Humane Economy, and dozens of other organizations and businesses called on the Senate to pass the legislation this week.  If it clears the Senate, the organizations are calling on the House to take it up right away. The original House version of the FDA Modernization Act, H.R. 2565, was introduced by Representatives Vern Buchanan, R-Fla., and Elaine Luria, D-Virg., and also has broad bipartisan support.

The U.S. House of Representatives passed its FDA legislative package for user fee reauthorization in a landslide vote of 392 – 28 in early June after the committee passed the measure 55 – 0. The Senate HELP Committee passed its version of the package in June. Senator Ben Ray Lujan, D-NM, succeeded in strengthening the FDA Modernization Act by adding language to amend the Public Health Service Act to remove the animal testing requirement for biosimilars. His original bill, the Reducing Animal Testing Act, is included as a provision in the Senate bill introduced today. 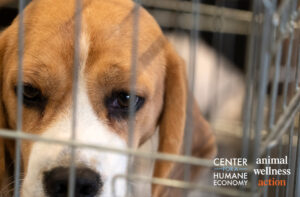 The amended legislation has the potential in the coming years to prevent the use of millions of animals and to deliver safer, more effective drugs to patients.

“Lawmakers from both parties recognize that the United States must lift an archaic animal-testing mandate for drug development and replace that strategy with 21st-century methods grounded on human biology,” said Wayne Pacelle, president of Animal Wellness Action and the Center for a Humane Economy. “This is the biggest policy development in Congressional history on the fight to replace animal testing with morally and scientifically superior methods.”

“The FDA Modernization Act would accelerate innovation and get safer, more effective drugs to market more quickly by cutting red tape that is not supported by current science,” said Senator Rand Paul, R-Ky. “It would also prevent the needless suffering and death of animal test subjects—which is something I think both Republican and Democrats can agree needs to end.”

“We are already on the verge of the next phase of modern drug development, and FDA modernization will be the catalyst for this transition to modern science,” said Tamara Drake, director of research and regulatory policy at the Center for a Humane Economy.

“Thanks to modern scientific innovation, the use of animal toxicity testing for experimental drugs has become increasingly obsolete,” said Senator Cory Booker, D-N.J. “This legislation will eliminate unnecessary suffering for countless animals when scientifically reliable alternative testing methods are available.”

“The legislation introduced today will bring safer drugs to market more quickly at less cost, and save countless animal lives.” said Marty Irby, executive director at Animal Wellness Action who was named one of The Hill’s Top Lobbyists for 2019-2021. “We call on both the Senate and the House to swiftly pass the FDA Modernization Act and send it to the president’s desk to be inked into law.”

Data show that it typically takes 10 to 15 years and an average investment of $1 to $6 billion to get a new drug to market. Animal tests are non-predictive of the human response to drugs. This antiquated process of pharmaceutical innovation slows delivery of palliatives and cures for patient groups, drives up drug costs, and sacrifices countless animals.