Will Walmart abide by Prop 12?​

The nation’s most important farm animal welfare law — Proposition 12 — is the law of the land in California on January 1, 2022. The measure approved by voters in November 2018 bans the extreme confinement of veal calves in small pens, breeding sows in narrow metal crates, and laying hens in bread-box-sized wire cages. Even more importantly, it stipulates that pork, eggs, and veal cannot be sold in the state from farms using these pens, cages, and crates. That means that if farmers in Iowa and Minnesota choose to ship eggs or pork to California, and want to sell their product there, they have to conform to California’s new animal safety and food safety standards. 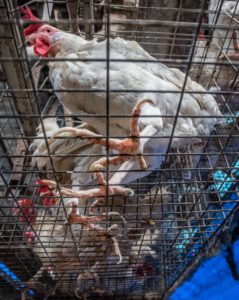 In the nation’s biggest marketplace — with nearly 40 million consumers — will the biggest food retailers be diligent about observing the new law? Walmart is the nation’s biggest food seller, and this law will test if Walmart can get square with the law when it comes to its own supply chain. It’s not a new subject for the box-store giant because several years ago, it committed to the Five Freedoms of Farm Animal Welfare, and that includes giving animals some measure of freedom of movement.

Come January 1st, all of the eggs Walmart sells must come from cage-free hens. That means the hens live in pastures, or with at least 144 inches of space if they live in aviaries, and or 216 square inches if the birds are on the floor of a barn. No hens trapped in cages of any size. Pork must come from facilities that give the sows 24 square feet of space. There are new legal space standards for veal calves as well.

Walmart faces the same question as McDonald’s and Burger King and every other food retailer, large and small, that chooses to sell in this biggest of American marketplaces. These companies have a duty to obey the law and California consumers can remind them of that responsibility.

Prop 12 gave the suppliers and retailers three years to get things in motion. But this law is just the latest in a series of major flares to the food retail sector. Voters banned extreme confinement in the state 13 years ago by passing Prop 2. And lawmakers passed legislation in 2010 to require that hens have at least 116 square inches of space. Some provisions of Prop 12 have already taken effect, but the final space allotments all kick in January 1st. It’s a big moment for animal welfare. But the law must be observed, and that means food retailers need to understand where meat and eggs come from and that consumers can have piece of mind that their actions in the voting booth translate to the breakfast and dinner tables.

Come January 1st, all of the eggs Walmart sells must come from cage-free hens. That means the hens live in pastures, or with at least 144 inches of space if they live in aviaries, and or 216 square inches if the birds are on the floor of a barn.