Washington, D.C. — Animal Wellness Action, the Center for a Humane Economy, and the Animal Wellness Foundation renewed their call for congressional oversight and reformation of the Bureau of Land Management’s wild horse and burro program in the wake of a new investigative report released by wild horse advocacy group American Wild Horse Campaign.

That report revealed that at least 840 formerly wild BLM horses and burros that had been adopted through the agency’s infamous Adoption Incentive Program (AIP) ended up at kill pens and slaughter auctions. 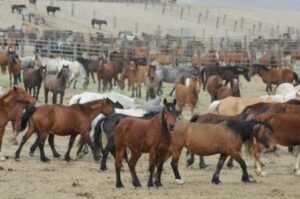 The AIP first attracted national attention last August when the New York Times published a story that documented horses and burros shunted from off-range holding facilities to the slaughter pipeline via unscrupulous adopters who exploit the AIP. The agency pays adopters $1,000 per animal they adopt and allows adopters to take possession of up to four animals. After holding the animals for a year, the BLM sends the adopters title certificates, at which point the animals are the legal property of the adopters. The report detailed how groups or families of adopters pocketed tens of thousands of dollars, with one family taking $82,000 in taxpayer money in adoption incentive funds. Those adopters then further enriched themselves by taking the animals to the slaughter auction after they secured ownership certificates from the BLM.

Allowing formerly wild horses and burros to go to slaughter violates both the mandates of Congress and the BLM’s own policy statements. Since there are no longer equine slaughter plants in the United States, the animals not saved by rescues, sanctuaries or private buyers are trucked to slaughter plants in Canada and Mexico. After the New York Times story, the BLM pledged to make reforms to prevent horses and burros falling into the slaughter pipeline, but the AWHC report makes plain that those reforms are woefully inadequate.

“This report demonstrates what those of us in the larger wild horse advocacy community have long stated: the BLM’s Adoption Incentive Program cannot be ‘reformed,’ but must instead be immediately terminated,” said Scott Beckstead, director of campaigns for Animal Wellness Action and the Center for a Humane Economy.

“If Secretary of Interior Deb Haaland and BLM director Tracy Stone-Manning are unwilling to step in and cancel this disastrous adoption program, then Congress needs to immediately step in and exercise some oversight.”

“Once again we see that the BLM will never do the right thing because it’s the right thing to do,” continued Beckstead. “At this very moment wild horses are being stampeded into traps, many are injured, and some are killed in the BLM’s horrific helicopter roundups, and their plight is even more distressing knowing that those who survive the carnage of the roundup will then be placed at risk of being killed and butchered in a foreign slaughter plant.”

“We are grateful for the good work of AWHC in conducting this investigation, compiling the findings, and making the report available to the public and policymakers,” he said.