Partnership with Save the Dogs and Other Animals Results in Life-Saving donations, relief efforts

Washington, D.C. — The Center for a Humane Economy has funded its first truckload of food for dogs, cats and other animals imperiled by the aggression in Ukraine.

Thanks to the generosity of its supporters, the Center purchased a $20,000 shipment of food, which is now in the process of reaching the thousands of hungry former pets. 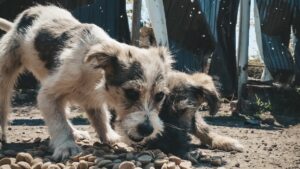 Americans are familiar with the heartbreaking news from Ukraine: the suffering of families and communities pummeled since the Russian invasion. What they hear less about is the plight of animals once living with those families, who have been left behind as their families had to urgently flee and who are now trying to survive on the battered streets of cities and villages.

But there is hope today as animal welfare organizations including the Center for a Humane Economy have joined together to create a network to make an impact on the food shortage.

Jennifer McCausland, senior vice president for the Center, heard about the escalating crisis for animals not long after the start of the war and visited the region to evaluate how the Center could help. In Romania, she met with officials from Save the Dogs and Other Animals, which had already begun an underfunded relief effort.

You can help today with our next shipment. Go here to donate now to this life-saving work.

“The reports from Ukraine today are that there is up to 5 million abandoned dogs, cats and horses near starving and walking the streets. While that number sounds overwhelming if everyone one of us contributes $25 immediately, we will be able to feed the vast majority of these animals for at least 2-3 months,” said McCausland.

These now-homeless animals roam the streets, attacking food frantically when can they find it, then quickly turn back to the streets to continue their struggle to survive. The psychological impact is visible on their faces, which show signs of the stress of living amidst the noise and chaos of daily shelling and troop activity.

The Center has urged the U.S. Army Veterinary Command to deploy to Romania and Ukraine to use its personnel and other assets to assist animals injured in the conflict.

Fortunately, there are several international animal-rescue organizations on the ground in Ukraine as well as in Romania and Poland. Organizations hope first to save the animals from starvation and then to facilitate rescue and adoptions all over Europe.

A volunteer from our partner organization called Save the Dogs, in the city of Izmail, explained the dire situation on the ground.

“There are a lot of refugees in our city who have nothing to feed the animals. People came from Mariupol, Mykolaiv, Severodonetsk. So many people need food. We distributed food to those we know, but there are so many refugees, so many animals and no food,” said the volunteer.

The Center is counting on its sister organization, Animal Wellness Action, and its subscribers and donors to make a life-changing difference for these animals.

“Our goal is to provide one truck load of food monthly for the duration of the conflict, and we have already reached that first month’s goal. But the next month – and the next month after that – will come quickly. That’s why we need everyone to join us all now to support this life-saving mission,” she said.

We can help save the companion animal victims of Russia’s aggression.